THE SMARTEST HOLIDAY? ON A BIKE, PHYSICALLY-DISTANCED AND HAPPY

TRAVELLING IN FREEDOM, UNHURRIEDLY, DISCOVERING THE BEST OF THE TERRITORIES. BETWEEN ART, CULTURE, LANDSCAPES AND GOURMET DELICACIES, “GRAND TOUR” IS BACK IN STYLE. SIMPLY CHOOSE YOUR FAVOURITE MOTO GUZZI, DON YOUR HELMET, AND TWIST THE THROTTLE. AND, FOR THOSE WHO WANT SOME ADVENTURE, THERE IS THE UNMISSABLE MOTO GUZZI EXPERIENCE: TOURS IN THE SADDLE, FROM THE BALKANS TO THE APENNINES, FROM SARDINIA TO TUNISIA.

July 2020 – Lonely Planet, the independent traveller’s “bible” relaunches the “Grand Tour”, publishing the new 2020 edition of the guide to Italy on the road, suggesting forty itineraries, from the Alps to the Islands, promoting the most spectacular places and the less-known hamlets. And what could be better than discovering or rediscovering the Belpaese on two wheels, far from all the chaos and traffic, travelling on alternate roads, physical distanced and happy, free to go and stop where you please? 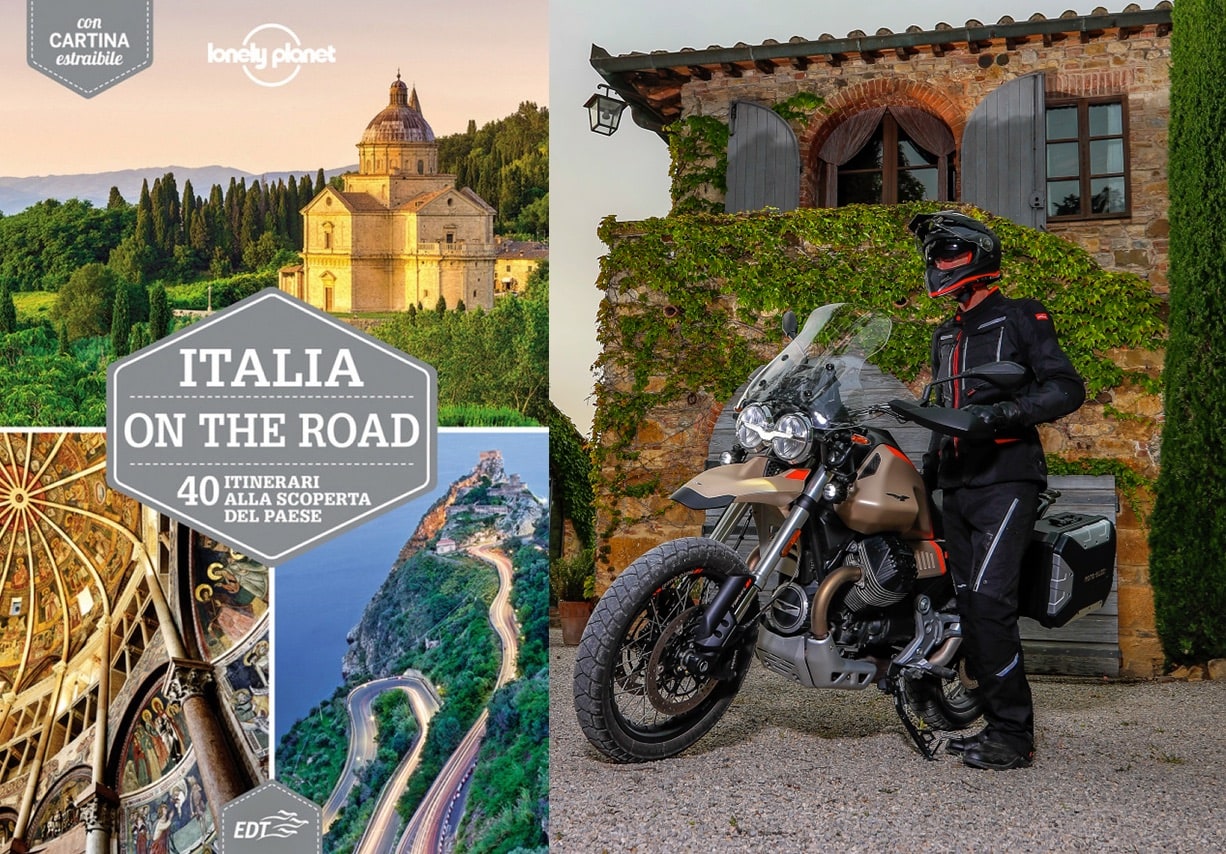 So, here is a quick overview of the models in the 2020 Moto Guzzi range, perfect travel companions for your holidays as well. 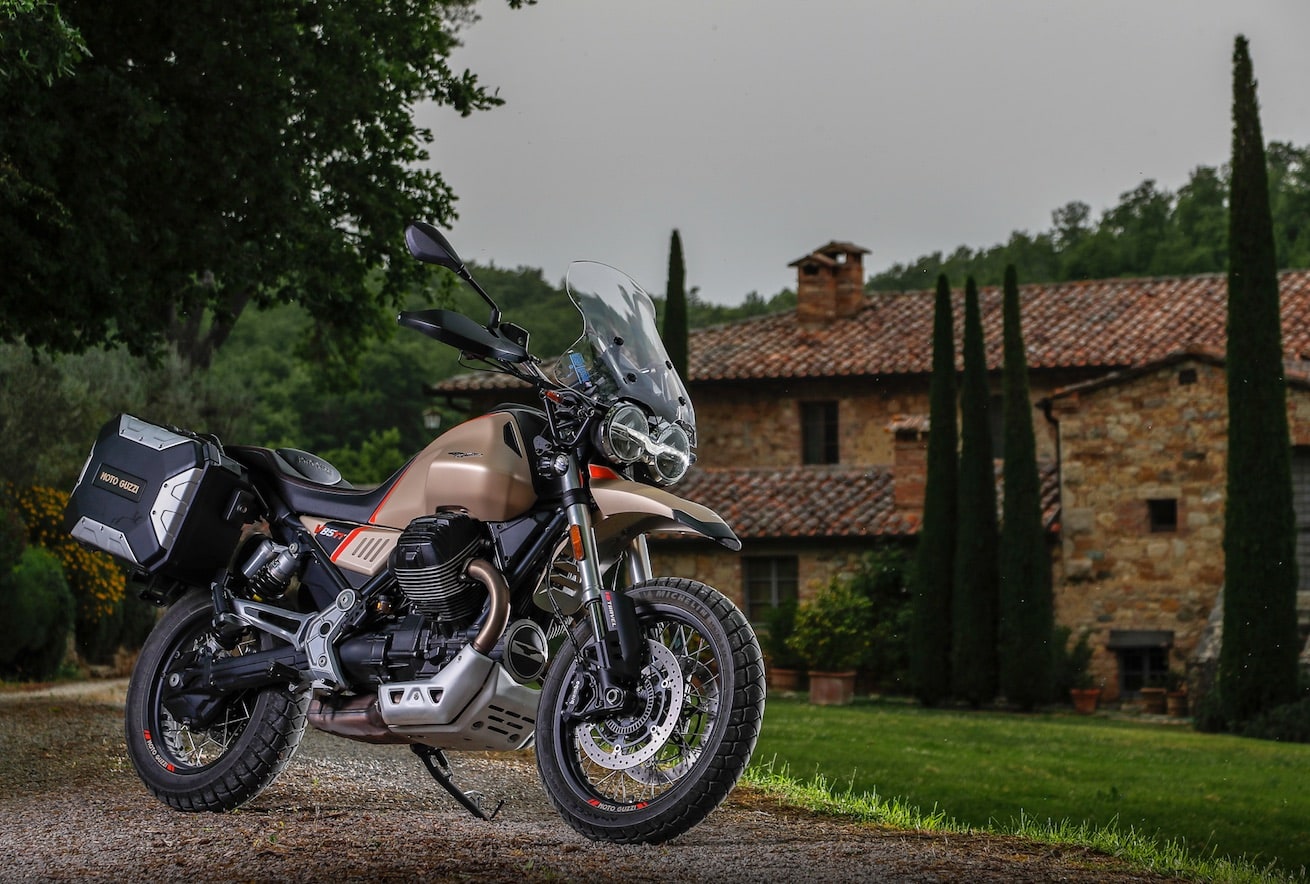 MOTO GUZZI V85 TT TRAVEL: THE NEW VERSION HIGHLIGHTS THE GRAND TOURING QUALITIES OF THE V85 TT. WITH STANDARD EQUIPMENT INCLUDING PANNIERS, A HIGH WINDSHIELD AND HEATED HAND GRIPS, THE V85 TT IS READY FOR ADVENTURE.

Following the critical and public acclaim achieved by the V85 TT, the first classic travel enduro that knew how to excite motorcyclists thanks to its ability to combine sophisticated and evocative style with cutting-edge technical qualities, Moto Guzzi presents the Travel version, ready to take to the road thanks to its complete dedicated range of equipment. Moto Guzzi has listened to the requests of Guzzisti, creating a V85 TT version that is prepared as standard with a selection of essential adventure touring accessories.

Moto Guzzi V85 TT reflects a construction philosophy in which simplicity, practicality and handling make for an unfiltered relationship between bike and rider, one that is dedicated to adventurous travels, a true Moto Guzzi legacy, something that the Travel version further highlights. The equipment, made up of accessories that are all available in the catalogue, includes the higher Touring windshield, able to offer the rider greater air protection, thanks to a surface area that is 60% larger than the original part, as well as two panniers in plastic material with aluminium inserts. The panniers stand out for their significant capacity (37 litres for the right-hand case, which can hold a full-face helmet, and 27.5 litres for the left), locks that use the same contact key, and the absence of any voluminous supports to install them, hence the line of the vehicle remains intact when they are removed. Their lateral bulk is limited to just 928 mm, in that they are designed during development of the bike itself.
Also included as standard are the heated hand grips with buttons already incorporated in the original left-hand switch block of the V85 TT, and a pair of additional LED lights. The range of special equipment is rounded out with Moto Guzzi MIA, the multimedia platform that allows the rider to connect a smartphone to the vehicle, extending the functions of the instrument cluster. The Moto Guzzi V85 TT Travel is offered in the exclusive Sabbia Namib colour: the grey frame is paired with the matte colour of the chassis, while the tank and side panels are enhanced with dedicated graphics. Michelin Anakee Adventure tyres underline the adventure touring attitude. 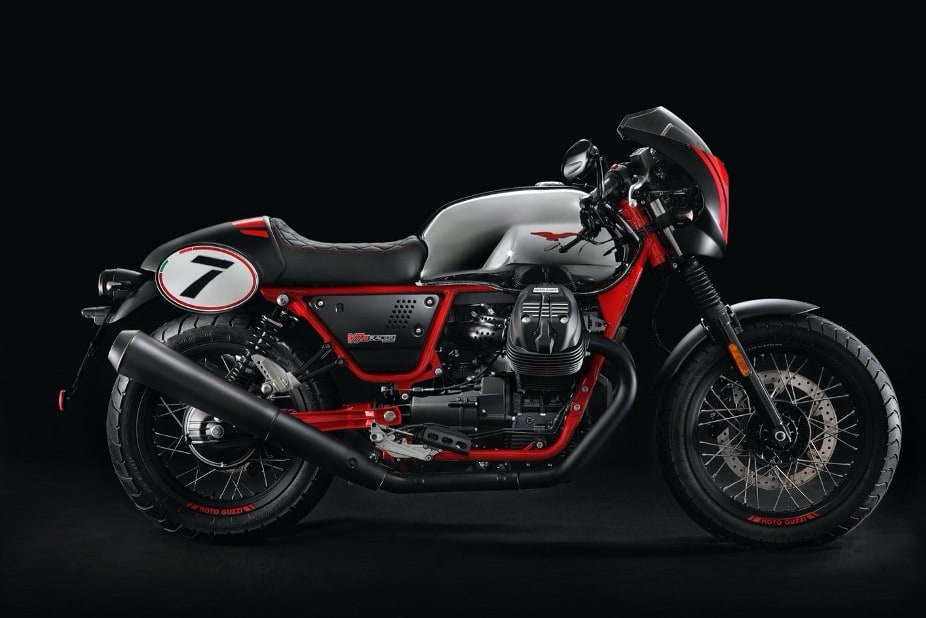 MOTO GUZZI V7 III RACER 10th ANNIVERSARY: THE SPORTY VERSION OF THE V7 RANGE CELEBRATES TEN YEAR TAKING ON AN EVEN GRITTIER LOOK THANKS TO A NEW TOP FAIRING AND FULL LED LIGHT CLUSTERS. FROM THE FUEL TANK TO THE RACING NUMBER PLATES, IT HAS NUMEROUS FEATURES REMINISCENT OF THE PREVIOUS VERSIONS OF THE UNMISTAKEABLE CAFÉ RACER FROM MANDELLO.

Moto Guzzi V7 Racer has always been the ambassador of the V7 range with the sportiest spirit. Born in 2010, evolved in 2015 with the arrival of the V7 II Racer and in 2017 with the birth of the third generation, in 2020, the Moto Guzzi V7 III Racer reinvents itself once again, and it obviously does it in accordance with tradition, while celebrating its tenth anniversary.
The new Moto Guzzi V7 III Racer 10th Anniversary differs clearly from the previous version in the front view, where a new top fairing with incorporated windscreen stands out, sleek and sporty, following the dictates of the most authentic Café Racer style. The top fairing is enhanced by a special red dedicated graphic - also picked up on the saddle cover hump - which flaunts the “10th Anniversary” celebratory detail.
At the centre of the top fairing is the new, full LED headlight, just as the taillight and turn indicators are also LED. A modern and dynamic look also emphasised by a thinner and sleeker rear mudguard, and by brand new “bar end” rear view mirrors. 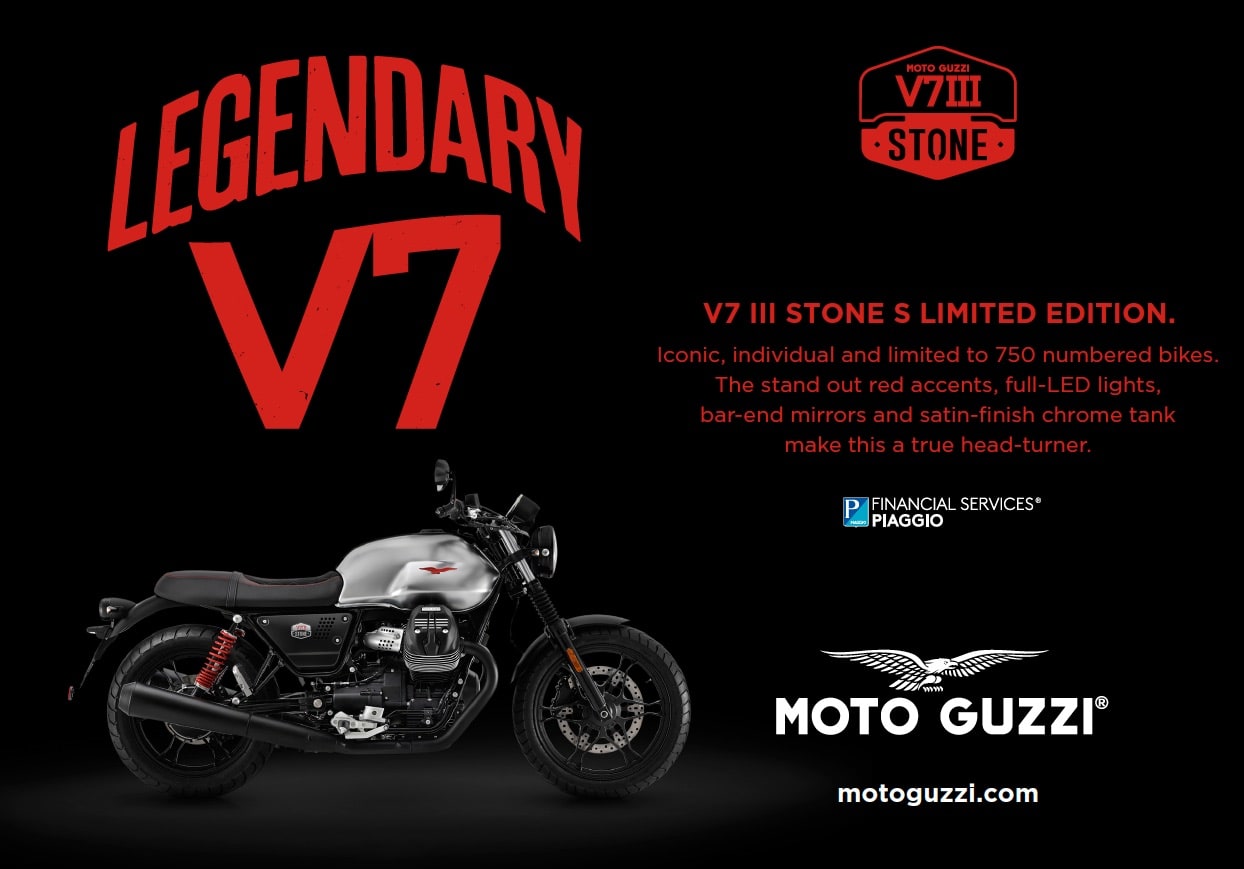 In the history of the Eagle, the letter S immediately brings to mind the sporty Moto Guzzis of the early seventies, such as the fortunate 1974 750 S, heir to designer Lino Tonti's masterpiece, the 1971 V7 Sport, the first 200 units of which were characterised by the red painted frame.
Inspired by this rich tradition, a new, exclusive variation of the Moto Guzzi V7 III Stone has now come out of Mandello del Lario, aptly called the S version: made in a limited and numbered edition, V7 III Stone S is the sportiest and trendiest version of a highly successful model, characterised by an essential style and a strong propensity for customisation.
The only member of the 2020 V7 III family to be produced in a limited edition, Moto Guzzi V7 III Stone S will be manufactured in just 750 units, a number that evokes the engine capacity of the “seven-fifty” from Mandello. To further highlight the exclusive nature of this particular version, the serial number of the model is engraved on the handlebar riser. 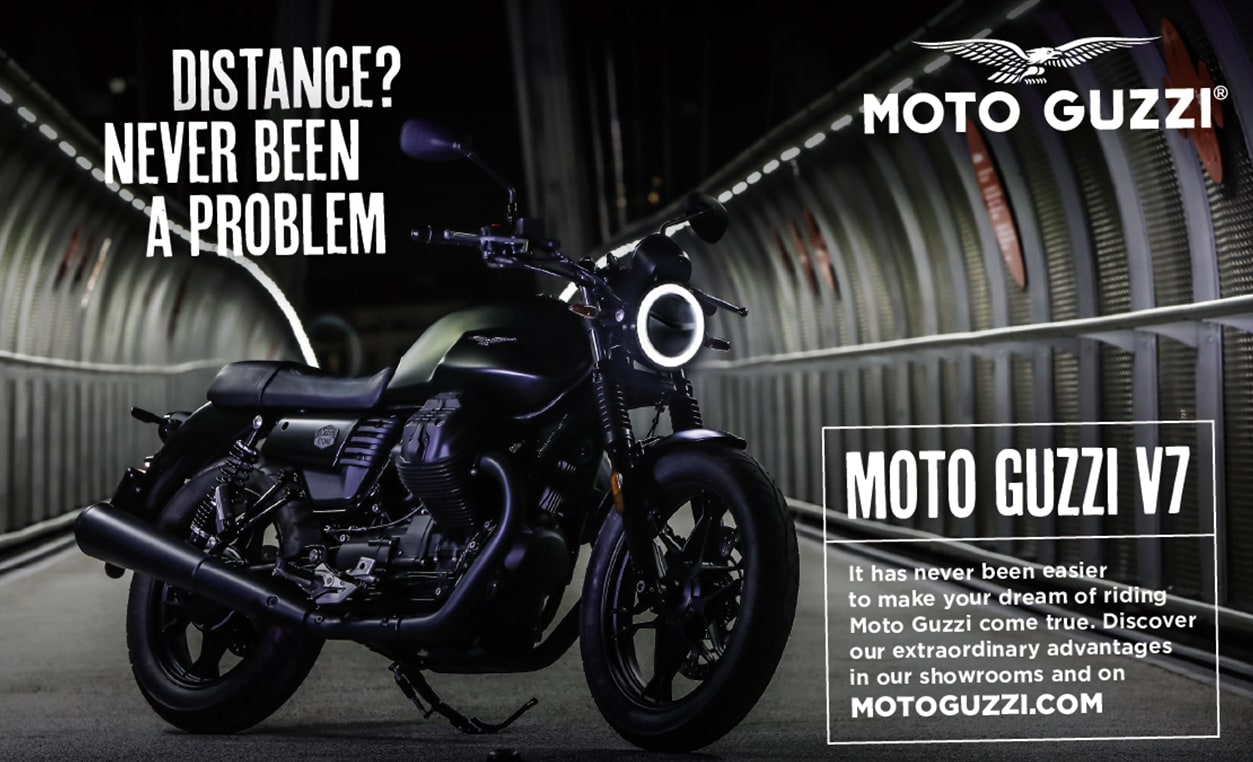